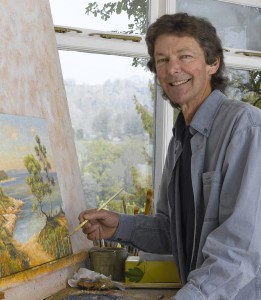 Mervyn Goode is one of the country’s leading and most respected traditional landscape painters in oil. Born in 1948, he studied Landscape Architecture at The Gloucestershire College of Art, but bravely eschewed this career in 1970, at the age of 21, to pursue his true vocation as a landscape painter.  His first One-man Exhibition, at the Highton Gallery in London in 1970, which featured entirely oil paintings depicting the Hampshire landscape, was a ‘sell out’, and stimulated considerable interest and achieved rare acclaim for one so young, from Collectors and Critics, both here and abroad.  In reviewing that Exhibition, the Sunday Telegraph Art Critic described him as a painter “who is in love with trees, nature, reality, creation and peace itself.”

Mervyn Goode’s career has flourished since that time.  Numerous One-man Exhibitions held in London and the provinces; a One-man Exhibition in the U.S.A; countless invited featurings in Mixed Exhibitions in Public and Private Galleries throughout the country; featurings in television documentaries; and an ever-increasing demand from Collectors in the UK and abroad, all bear witness to Mervyn Goode’s continuing success, and to the esteem in which his work is held.

Mervyn Goode has bravely devoted himself, throughout his career, exclusively to his landscape painting in oils – resolutely refusing to be caught or cushioned by the ‘trappings’ of those temptations which, as an artist, spell anathema for him: teaching and accepting commissioned paintings – one of the few living artists so to do – preferring to paint “what he wants to paint, when he wants to paint it, and how he wants to paint it”.

For forty-four years now, Mervyn Goode has lived in a rambling country house hidden just outside Hawkley, in Hampshire.  Deep in an environment of ancient, sunken tree-canopied lanes, and within the sound of the infant River Rother, the artist’s home and studio commands open and idyllic views across the wooded hanger of Noar Hill and along a secluded valley and rolling farmland towards the far-reaching countryside beyond – all of which feature so often in his works.  His wife, Stephanie, after being at his side from the beginning of his career as a painter, died of cancer in early 2018.  Their life was shared by a succession of labrador dogs (always two), which remains the case for Mervyn.

A keen naturalist, and ardent conservationist, part of his wooded garden is a small nature reserve – where badgers, foxes, deer and all species of wildlife and birds are welcome.  He is in good company, historically – for this is the Hampshire ‘Hangers’ area once dear to the Selborne naturalist Gilbert White; home to the poet Edward Thomas, who lived at nearby Steep; and enthusiastically recorded by William Cobbett in “Rural Rides”.

Mervyn Goode is an artist for whom to live among and know intimately the nuances of his cherished corner of the English countryside, in all its moods and seasons, is vital – the resulting empathy and rapport providing the inspiration which he is dedicated to portraying on canvas.

Not a prolific artist, the joy of painting for Mervyn Goode lies almost as much in the experience of seeking out subject matter, as in the execution of the painting itself, so that the two disciplines are inextricably bound up for him in the one creative process.  That process is, for Mervyn Goode, a solitary one.  He will walk for hours, and often days at a time.  Venturing sometimes into neighbouring Sussex, Surrey or Wiltshire, and sometimes further afield – but more often by tramping the countryside near to his home – he delights in walking through the area’s sunken ‘Green Lanes’ and its ancient woodland and meadows; alongside his favourite rivers; and over rolling downland – finding constant inspiration in often forgotten and abandoned corners of the countryside.

He is an artist who views the landscape from an intimate viewpoint, rather than seeking out ‘the obvious’; for he is mindful of Constable’s counselling  – that “Nature never reveals herself to the arrogant painter in the fullness of her glory, and the landscape painter must go into the field with a humble mind.”

Resolutely forswearing artistic fashion – choosing to paint the landscape which he loves in the way that he wishes – Mervyn Goode likes to feel that – while admitting to the early influence of the great traditional landscapists, such as Constable, and more latterly to that of the French Impressionists – Sisley, Monet and Pissarro – he has developed a style of painting landscape in oils which, while evolving over the years, remains recognisably his own.

Some thirty years ago, Mervyn Goode acquired a 16th Century cottage in the Village of Slapton, in the South Hams area of South Devonshire – within walking distance of Slapton Ley Nature Reserve and the nearby coastline with which he fell in love as a student while staying at the Slapton Field Studies Centre.  While remaining devoted to that cherished area of countryside close to his home, his second home, which he has recently sold, enabled him to broaden his subject matter, and experiment further with his style of painting, so that collectors have been able to share his love of the rich South Hams landscape, the wildness of Dartmoor, and the rugged coastline lying between Dartmouth and Salcombe, with those estuaries and creeks which he finds increasingly inspiring.

Although not a “traveller” by nature, being very much a “home loving” person, both spiritually and artistically, Mervyn Goode has, in recent years, introduced into Exhibitions of his works paintings inspired by his  travels to the South of France – where the quality of sunlight and warmth on the landscape and seascape appeal to and inspire him enormously.

Mervyn Goode’s work has been reproduced by the Medici Society, Kingsmead Publications, the Bucentaur Gallery, CCA Stationery, Royle Publications, Country Cards, the Almanac Gallery, the Paper House Group, Phoenix Trading and Rosentiel’s (who, during 2004, launched a publication of strictly limited edition prints of two of his paintings, each being an issue of 295 copies signed by the artist), and in numerous Fine Art Books and Periodicals – and featured in various Television productions/documentaries.

Here is, indeed, an artist “in love with trees, nature, reality, creation and peace itself” – whose work will doubtless survive for and be appreciated by many generations to come.